We Need Some Heroes 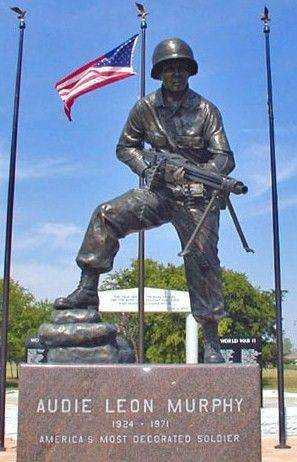 President Reagan spoke at Arlington National Cemetery on Memorial Day, several times. Presidents used to do that sort of thing. In his Memorial Day speech of 1986, Reagan talked about some of the heroes buried at Arlington.

Of Audie Murphy, Reagan said: "Audie Murphy is here, Audie Murphy of the wild, wild courage. For what else would you call it when a man bounds to the top of a disabled tank, stops an enemy advance, saves lives, and rallies his men, and all of it single-handedly. When he radioed for artillery support and was asked how close the enemy was to his position, he said, "Wait a minute and I'll let you speak to them.""

Of Joe Louis, Reagan said: "Here in Arlington rests a sharecropper's son who became a hero...Joe Louis came from nowhere, but he knew how to fight. And he galvanized a nation in the days after Pearl Harbor when he put on the uniform of his country and said, "I know we'll win because we're on God's side."

Of course the left today would excoriate Joe Louis for dare saying that there is a God, much less that America would be "on God's side".

Reagan also spoke that day of Michael Smith and Dick Scobee, both of the space shuttle Challenger. "Their courage wasn't wild, but thoughtful, the mature and measured courage professionals who took prudent risks for great reward-in their case, to advance the sum total knowledge in the world...they join other great explorers with names like Grissom and Chaffee."

What is the purpose of remembering heroes?

Why would Obama not remember our heroes? Obama has no problem with bowing to every dictator or Communist he can find, and then apologizing to these same creeps for America, over and over again - but when it time comes to recognize America's heroes, Obama is a no-show.

It is my firm belief that the Obama-Soros Administration is more of a threat to America, to our Republic, and to our Liberty, than any adversary we have faced in any war since the Constitution was ratified.

The left, with Soros and Obama leading the way, have eaten away at our education systems, and turned them into big government leftist indoctrination centers. The left has surely dumbed down entire generations, and poisoned the minds of so many with leftist tripe and propoganda.

The left, with Soros and Obama leading the way, have attacked our industries, our wealth production, small businesses, and they seek to give illegals residents of our country MORE power and MORE say-so than real citizens.

We have some dark days ahead. The Obama administration, the left in general, are just waiting for the right crisis in which to clamp down even harder, take more liberty, take more freedom from the people.

We are going to need some new heroes folks. Some of you are going to have to put down the remote and get involved. The enemies of Liberty are going to do their best to ruin the foundations of this country before we can vote them out of office.

I am not even sure that in the big cities, that honest elections are even possible because of the Democrat Socialists Workers Party. (today's Democrat party)

President Obama has come to divide us, and to crush the exceptionalism that made the United States the greatest nation in the world. Liberals hate American exceptionalism. They want everyone to be miserable. (Except for them, the oligarchy)

We need business heroes, women and men who will find a way to stay in business - even with crushing taxation and regulation.

We need education heroes, teachers willing to take on the nutty teachers' unions, and begin teaching in the classrooms again, not indoctrinating. This will take guts, because you take on the union thugs, and they will seek to destroy you.

We need political heroes. Elected officials that actually follow the Constitution of the United States, not engage in the sheer lawlessness of this administration. We need political heroes to stand boldly for the God given rights of Life, Liberty and the Persuit of Happiness, and to boldly stand against government creating rights for political ends.

We need food stamp heroes. Men and women who will stand up and stop taking government handouts. Stop taking bribes from the government! Learn how to feed yourself. Sure, you may not have a third television in your house, of your fourth cell phone, but you'll feel better about your self if you will at least take the responsibility of getting your own food.

Most important, we need race heroes. We need people to stop letting the Democrat Socialists Workers Party cry racism every time someone would dare exercise their right to object. I do find a growing number of black Americans and Americans of Hispanic decent are beginning to see what the Obama Administration is.

This is a punk administration. This is an Administration that will force it's "we are smarter than you so shut up" agenda upon the folks.

We need some heroes. The thing is, my fellow conservatives, we have no choice. We must step up, we must be strong, or our kids, and grandkids are going to pay a price we cannot imagine.

I know some liberals out there, are proud of the burden they are throwing on the backs of the young. Some have bragged, in answer to my blogs, how their kids are glad to have trillions of debt heaped on them.

That is not America folks, heaping problems and debt upon our young. That is the America that the left wants and we must stand against that.

We need some heroes. Will you stand up?