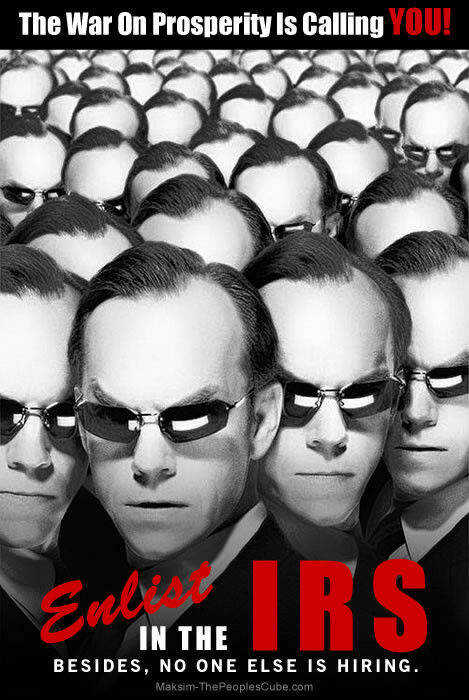 As America descends further into the great liberal abyss, I'd like to preview the reality and game shows which may soon appear in the land of Obama.

Yes, it's Citizen IRS, the exciting new reality show that turns up the heat on those nasty rich people. Each week, a mob of highly educated underachievers strikes out in search of rich people to make sure THEY pay more than their fair share.

Don't forget our weekly prizes to you viewers, up to $5000 each time you can think of a new tax! Our government needs your help, we need to tax every dollar, as many times as possible. Then our President can hand out lots of cash to everybody on the planet so they won't hate us.

This week, the Citizen IRS gang has targeted a shoe store at a local mall. There have been reports that the store owner listens to Rush Limbaugh - at the store! The Citizen IRS mobsters are going to do a 'Surprise People's Audit' of the greedy Capitalist pig.

Naturally, we'll use protests, biased media coverage, possible legal harrassment, and charges of racism, to make certain that self-employed scumbags contribute every dime they must to support our loving and kind-hearted government.

Prizes for Contestants participating in Citizen IRS include thousands of dollars in tax credits, early student loan payoffs, up to 10 years of unemployment benefits and, of course, the big prize, the Citizen IRS health insurance waiver, allowing contestants to stay on their parents insurance until age forty!

Welcome to The Second Chance, the reality game show that allows six people each night, to appear on national television and appeal for The Second Chance. All have been denied medical treatment by our most loving government health care managers, and they now appeal to you - America, to decide who gets The Second Chance.

Three of our contestants get the treatment they want, and three contestants will be told to go on ahead and die and fulfill their patriotic duty to the State.

As Obama and company work continue their "holy" work to destroy the private sector in America, there will be a need for more and more government workers. Yes, millions of government employees are needed to forever enforce the love that our government has for us.

This will be excellent show for young college grads, who - having majored in fields which have no earthly purpose, will find the high paying jobs they dream about.

For a new college grad, becoming a member of the IRS Gestapo would be an opportunity to actaully use all of the Marxist indoctrination they were brainwashed with in college.

Yes, it's Government Apprentice, the game show that may help your child, the 30 year old college grad, still living in your basement, to actually pretend like they have a real job.

There are more reality/game shows that we could talk about, but I'll leave them to your imagination. Shows like:

Actually, Find a Christian would be an interesting show. Each week, the Find a Christian crew will go out in search of any person that actually acts like the Bible is true, and Jesus is Lord. This may prove to be the most difficult task for any game show.

Oh, I realize there are lots of folks who SAY they believe the Bible, and they SAY that Jesus is Lord, HOWEVER, when you consider how these same folks have stood up for God, finding a real Christian may be the toughest challenge of all.

If you'd like to see a video of someone who is really diggin' Obama and Obamacare, check out this youtube video:

More from this blogger · Sam Eldridge
Comments
View 25 comments
Note: The nature of the Internet makes it impractical for our staff to review every comment. Please note that those who post comments on this website may do so using a screen name, which may or may not reflect a website user's actual name. Readers should be careful not to assign comments to real people who may have names similar to screen names. Refrain from obscenity in your comments, and to keep discussions civil, don't say anything in a way your grandmother would be ashamed to read.
Respond to this blog