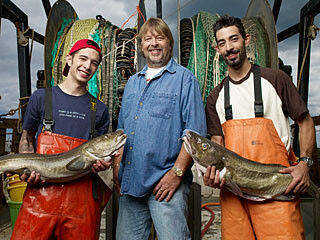 I feel like I have lost a friend. Captain Phil Harris, of Deadliest Catch fame, died late Tuesday, from complications from a stroke he suffered January 30th.

Phil and his crew were off-loading their catch from the F/V Cornelia Marie at St. Paul Island in Alaska, when the captain suffered a stroke. Three days later Captain Phil's sons, Josh and Jake, issued a statement that their dad was "showing signs of improvement", but warned there was a long road ahead.

Sure Captain Phil lived life with gusto. Some might call him reckless, but I suspect that Phil Harris lived allot of life in his fifty three years.

In an interview in 2007, Captain Phil was asked what lessons he hoped to pass on to his sons. Phil responded, "I don't know if there is one lesson, but in general, if I died tonight and was gone, I hope they'd have the integrity to do what they say, be honest, and do honest work for an honest wage and not short change themselves or anyone else. To be honest about how they live and work. Don't sidestep things or try to cut corners. Do an honest hard job, and do it to the best of their ability."

Phil began working on fishing boats when he was seven years old. At seventeen he began working crab boats, and at age twenty one, he ran a fishing boat out of Seattle, making him one of the youngest guys to ever captain a vessel in the Bering Sea.

I am going to miss Phil Harris because he was a real man, and there is a real shortage of real men around anymore. He had a wicked sense of humor that he did not let the PC police curb. He was blunt, but such people are people you can trust.

God Bless you Captain Phil, and my best wishes go to Josh and Jake. Your pop left a hell of a footprint.

Until my dying day.

And when it comes to my last cast,

I then most humbly pray:

When in the Lord's great landing net

That in His mercy I be judged

More from this blogger · Sam Eldridge
Comments
View 5 comments
Note: The nature of the Internet makes it impractical for our staff to review every comment. Please note that those who post comments on this website may do so using a screen name, which may or may not reflect a website user's actual name. Readers should be careful not to assign comments to real people who may have names similar to screen names. Refrain from obscenity in your comments, and to keep discussions civil, don't say anything in a way your grandmother would be ashamed to read.
Respond to this blog