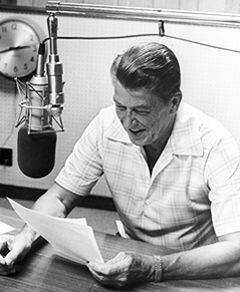 The following from "Reagan, In His Own Words."

September 1, 1976 - Reagan had been asked to write a letter for a 100 year time capsule to be opened for the Los Angeles Bicentennial.

"...Suddenly the simple drafting of a letter became a rather complex chore. Think about it for a minute. What do you put in a letter that's going to be read 100 yrs. from now-in the year 2076? What do you say about our problems when those who read the letter will know what we dont know-namely how well we did with those problems? In short they will be living in the world we helped to shape."

"Will they read the letter with gratitude in their hearts for what we did or will they be bitter because the heritage we left them was one of human misery? Oh I wrote of the problems we face here in 1976...bigger & bigger govt., less & less liberty, redistribution of earnings through confiscatory taxation or trying to get back on the original course set for us by our Founding Fathers? Will we choose financial responsibility, limited govt., and freedom of choice for all our citizens? Or will we let an irresponsible Congress set us on the road our English cousins have already taken? The road to economic ruin and state control of our very lives?"

"If we here today meet the challenges confronting us, -those who open that time capsule 100 yrs. from now will do so in peace, prosperity and the ultimate in personal freedom."

"If we dont keep our rendezvous with destiny, the letter will never be read-because they will live in a world we left them, a world in which no one is allowed to read of individual liberty or freedom."

"I'm afraid you are in for a little bit of philosophizing if you don't mind. ...Right now however I'm looking down on a busy city at rush hour. The streets below are twin ribbons of sparkling red & white. ...I wonder about the people in those cars, who they are, what they do, what they are thinking about as they head for the warmth of home & family. Come to think of it I've met them-oh-maybe not those particular individuals but I still feel I know them. Some of our social planners refer to them as "the masses" which only proves they dont know them."

"I've been privileged to meet people all over this land in the special kind of way you meet them when you are campaigning. They are not "the masses," or as the social planners would have it - "the common man". They are very uncommon. Individuals each with his or her hopes own hopes & dreams, plans & problems and the kind of quiet courage that makes this whole country run better than just about any other place on Earth."

"Someone very wise once wrote that if we were all told one day that the end was coming: that we were living our last day, every road, every street & all the telephones lines would be jammed with people trying to reach someone to whom we wanted simply to say, "I love you." But Doesn't it seem kind of foolish to wait for such a final day and take the chance of not getting there in time? And speaking of time I'll have to stop now - operator I'd like to make a phone call - long distance please."

"This is RR. Thanks for listening"

More from this blogger · Sam Eldridge
Comments
View 51 comments
Note: The nature of the Internet makes it impractical for our staff to review every comment. Please note that those who post comments on this website may do so using a screen name, which may or may not reflect a website user's actual name. Readers should be careful not to assign comments to real people who may have names similar to screen names. Refrain from obscenity in your comments, and to keep discussions civil, don't say anything in a way your grandmother would be ashamed to read.
Respond to this blog