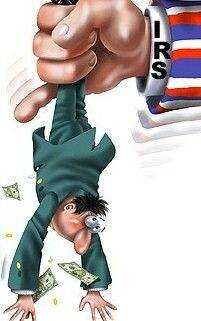 Sooner than you think the Obama Administration will begin tax increases on every industry that the libs/progressives consider as enemies. They will go after big oil, big timber, big fishing, big tobacco, big banking, big energy, big manufacturing, (unless it is union run) big health care, big insurance, and so forth.

We also know that the Obamunists will keep up their all out war against small business owners and the self-employed. The Obamunists strive to get people to stop thinking they can take care of themselves.

Let's start with a tax on big Legal, the Johnny Cochran "No Tort Reform" tax. Let's go after those windfall profits from big jury trial settlements. Let's take at least eighty or ninety percent, right off the top. Give that money to the poor. Come on lawyers dawgs, it is time to pony up for the socialism you help put into power.

Next it is time to look at big Media, the Chris Matthews Media Whore tax. Time for the lapdog, sycophantic media, that has actually become State run media, to pay up. Let's tax these bleeding hearts, inside the media, that promote government coming after every dime you and I have. Tell them the money is to pay for children's health care, of course.

Next, we need to go after big Abortion. Along with the unions and lawyers, big Abortion has thrived due to the efforts of liberals and progressives. Baby killing has become big business for big bucks, and Planned Parenthood should be charged extra taxes to pay for, let's say...adoption instead of murder. We can call it the Kathleen Sibelius, "I don't see nothin'" tax.

Let's not forget our friends in the Environmental movement. These folks have sucked billions, and even trillions of tax dollars, in search of their marvelous green fantasies. We need the Algore Tree Hugger Tax. Algore will soon have earnings equal to a billion dollars, as he flies around the world telling people not to travel. Green Weenies like Algore need to pay the Tree Hugger Tax to help defray the costs of higher energy bills on the way from the Obamunists.

We can not forget big Education. Oh my, the fat cats living like royalty in the nations universities, are ready for more taxation. They are begging for it, as they promote Socialism and Communism. These Marxists professors(that Obama loved to hang with in college), need to experience, first hand, the Marxism they preach. Take most of their income, let them live in the dorms, the very cheapest dorms, and ride bicycles.

And we haven't even begun to talk about going after the Unions. Holy cow! This is one group that the Obamunists have paid off for votes over and over again. They have received windfalls payoffs and bribes, so we need the Jimmy Hoffa Union Thug Tax, to rake in some income from the stimulus windfalls they have received.

What about big Hollywood? Oh yeah, the next time Jim Carrey gets twenty million for a flick, the George Looney Clooney Hollywierd Tax kicks in, and Uncle Sam should take about 19.5 of that twenty million. C'mon Jim, you're the one that talks about businessman earning too much money. Get most of the cash that Danny Glover or Sean Penn make. They love Cuba so much, let them live there, and they won't need much money.

Then there are the taxes that we can glean from the voter fraud groups, like ACORN. We need the ACORN Community Organizer Tax, to take huge parts of the income received from real estate fraud and money laundering.

Tax ACORN extra for each dead Democrat that votes, or for each Black Panther that patrols a polling station.

Even with all this, the Obamunists will still need more money. I am sure we can come up with a special tax for the AARP, or sports millionaires, or gay groups.

And let us not forget, a tax for the big Government Worker. Call it the Barack Obama Never Had A Real Job Tax. Time to take some of the massive pay increases that government workers have enjoyed while the rest of the economy tanks.

Some truth for you, if you can handle it: Liberals and progressives do not hate money. On the contrary, they love money. They only hate money when YOU have it.

More from this blogger · Sam Eldridge
Comments
View 29 comments
Note: The nature of the Internet makes it impractical for our staff to review every comment. Please note that those who post comments on this website may do so using a screen name, which may or may not reflect a website user's actual name. Readers should be careful not to assign comments to real people who may have names similar to screen names. Refrain from obscenity in your comments, and to keep discussions civil, don't say anything in a way your grandmother would be ashamed to read.
Respond to this blog