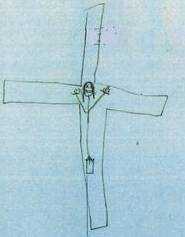 Some mainstream conservatives have a hard time accepting the reality that is the malignant left, not only in the USA, but around the world.

Maybe just a couple of reminders are order.

Item #1: In Taunton, MA, an second grade boy was suspended from school, and forced to undergo psychological counseling in order to be able to return to class. What was this little boys crime? The stick figure picture of Jesus on the Cross. The eight year old boy drew the picture when the children were asked to draw a picture that remind them of Christmas.

The Cross would be more relevant to Easter, however, this is a young child, and a special needs child according to his father. Many on the left showed disgust at Sarah Palin for having a special needs child, so maybe this 2nd grader is one of those children the left would love to have aborted to honor their dreams of a Fascist Utopian America.

The child has just been on a trip to a Christian shrine, (we all know how extremely holy Muslims shrines are), and the little boy saw a crucifix there. This youngster was too young to realize that all he need do to get on the schools good side, and be a little hero, was to pee on the picture of Jesus.

Item#2: Nebraska Senator Ben Nelson has been taking allot of heat from the radical left. Movealongdotorg has promised millions to bring down Ben Nelson should the Nebraska Senator actually stand against Dear Leader Obama and his plans. Senator Nelson has stood firm, at least so far, on the idea that Taxpayers should not be forced to pay for the abortion holocaust. Our government already gives millions to the abortion machine, but Ben Nelson was at least trying to stand for some sanity.

Louisiana Senator Mary Landrieu found that getting an extra 300 million in pork for her state, soothed her conscience. Apparently, Ben Nelson rates no such offer of cash for his conscience, instead Ben Nelson gets threats from the radical left.

And now, reports are surfacing that the White House has threatened Sen. Nelson with the closing of Offutt Air Force Base, unless the Senator step on his own conscience.

Senator Nelson, you supported these thugs Senator. You accepted money from the Democrat Party slush fund, aka: Stimulus, to vote for the Stimulus fraud. You now are in a position stand for a small light in a very dark administration. What will you do Senator? Will the Obamunists bribe you in the end? Or will the bully tactics of the Obamunists bring you to your knees?

Item#3: At the Dopenhagen Religious Festival it was Hugo Chavez that the worshippers saved their biggest applause for. Yes, lovable Uncle Hugo, set the room ablaze with twenty minute rant against the USA and capitalism. The room went crazy.

You did not see this news on NBC? How about ABC, CNN or MSLSD? Not on there either? Hummm. I found it in the Australian Sun Herald.

Commie Dictator Uncle Hugo said there was a "silent and terrible ghost in the room, capitalism..." the applause from the dirt worshippers was deafening.

Uncle Hugo then wound up his propaganda message to the sheep with this little pearl, "our revolution seeks to help all people...socialism, the other ghost that is probably wandering around this room, that's the way to save the planet, capitalism is the road to hell...let's fight against capitalism and make it obey us." There was a long standing ovation.

The left in this country probably stood as well. My friends, America has some dark days ahead, and unless some of you, get off your fat fannies and get serious about the world wide leftist threat against America, our country will be destroyed by these leftist goons.

As a nation, we need to return to God. Stop listening to seducing voices from the left, they promise you gold, and will deliver you chains.

That is why the fight for life is so very crucial. How can you, Mr/Mrs average American, bless even your own children when they commit evil, or do harm. Yet we Christians want God to bless our country, while we stand idly by as America turns its back on God. The leftists are systematically reducing our once great land to ruin.

"A man can no more diminish God's glory by refusing to worship Him than a lunatic can put out the sun by scribbling the word, 'darkness' on the walls of his cell." - C. S. Lewis

More from this blogger · Sam Eldridge
Comments
View 61 comments
Note: The nature of the Internet makes it impractical for our staff to review every comment. Please note that those who post comments on this website may do so using a screen name, which may or may not reflect a website user's actual name. Readers should be careful not to assign comments to real people who may have names similar to screen names. Refrain from obscenity in your comments, and to keep discussions civil, don't say anything in a way your grandmother would be ashamed to read.
Respond to this blog