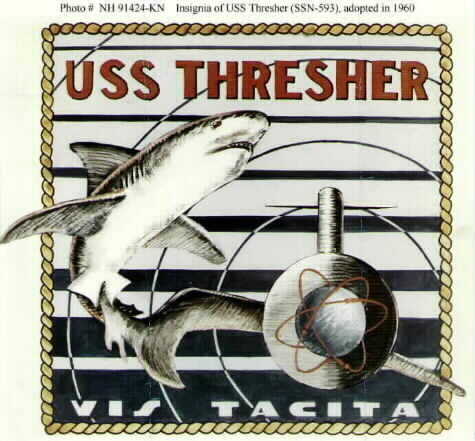 It was a chilly Wednesday morning, April 10th, 1963, when Captain John Harvey surfaced the USS Thresher. The submarine, the most advanced American submarine at the time, and fresh from a major overhaul, was ready for sea trials. The 129 Officers, crew and civilian personnel were anxious to put Thresher through her paces.

At 0635 hours, Thresher surfaces and makes radio contact with the Submarine rescue ship, USS Skylark. Thresher signals that she is ready to begin deep diving drills. The Thresher was to test her maximum operating depth of 1300 feet, and 220 miles off of Cape Cod, the Thresher began her descent in water almost two miles deep.

Then trouble. From years of investigations, it was decided that Thresher sprang a leak, most likely a pipe joint in engine room gave way. The resulting spray, (at nearly 650 psi) short circuited the electronics in the engine compartment, the reactor shut down and the Thresher lost power. The Skylark received a message from Thresher at 0907, indicating there was a minor problem, and that the Thresher would "blow ballast".

The great sub rose slightly when the crew tried to blow ballast, but with no power, she slipped deeper and deeper in the water. Aboard the Skylark, the stunned crew heard the mammoth submarine implode, and rip apart as she sunk below crush depth, killing all 129 souls aboard.

The Thresher disaster came at a difficult time in the cold war. Russian submarines were being positioned off the east coast of the United States, and the Thresher was to be the model of great American submarines that would thwart the Soviet threat.

James L. McVoy, former submariner and now the editor of the Naval Engineering Journal, thinks the Thresher may have been the victim of many mistakes. "The navy's ability to design subs that could attain great depths and speeds...,was ahead of its ability to cope with the conditions far below the surface." Captain McVoy further stated that, When the Navy tried to determine the cause of Thresher's loss we found so many things..."

The Navy stepped up the intensity of effort to build the right kind of submarine, in fact, the USA has only suffered one other submarine disaster since, in May 1968, the Scorpion sank after a torpedo exploded aboard ship, with 99 sailors loosing their lives.

This disaster and the huge loss of life spurred the Navy to do great things in underwater technology.

Our history, real American history, is chalked full of stories of sacrifice, heroism, and determination. This is the type of history that should be taught in schools, instead of the 'America sucks' history taught today in allot of schools.

Find out for yourself. Ask your average high school student, or even a college student, if they have ever heard of The Thresher, or The Battle of the Bulge, or Audie Murphy, or if they even know is what war the battle of Iwo Jima took place. Ask 'em if they know the history behind the USS Missouri, or if they know anything about Omar Bradley or George Patton. I think all you'll find is allot of blank looks. They probably will be able to tell you that Columbus was a creep, or that America is a racist country. Unfortunately, that is much of what is being taught nowadays by allot of whack ado history teachers.

I bring up the story of the Thresher to remind all of us, that many people through-out our history, have given their lives for this great country. It is not only for my children and grand children that I speak out against the radical Obama Administration. I remember the sacrifices of many a brave soul, who died for all of us, more than I remember our faults or our mistakes.

Every one, every country, has faults, and has made mistakes. I choose to look at America through the lens of The Thresher, the passengers aboard Flight 93, the men who took Iwo Jima, or a nineteen year old Audie Murphy in North Africa.

That is the America I love. In the name of heroes such as these, I say God Bless America.

My dad and my son - both Navy men, so let me add, God Bless the United States Navy.

More from this blogger · Sam Eldridge
Comments
View 11 comments
Note: The nature of the Internet makes it impractical for our staff to review every comment. Please note that those who post comments on this website may do so using a screen name, which may or may not reflect a website user's actual name. Readers should be careful not to assign comments to real people who may have names similar to screen names. Refrain from obscenity in your comments, and to keep discussions civil, don't say anything in a way your grandmother would be ashamed to read.
Respond to this blog